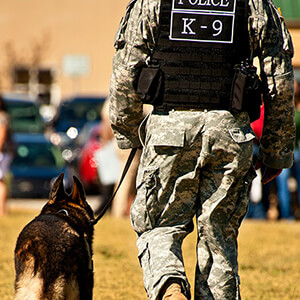 Have you ever wondered why a cat has nine lives or dogs are considered man’s best friend? We hear these phrases all the time, and where did they originate from? We thought we’d investigate.

For many obvious reasons, dogs have earned the position of man’s best friend.  For millennia they have been our companions, helpers, protectors, free-lance therapists and more.  Do you know, however, how that terminology came about?

More than 15,000 years ago, dogs followed humans as they migrated throughout East Asia.  Both being social by nature, humans and dogs were drawn to one another.  This is not where the phrase originated, however, it may be how the sentiment began.

In fact, it was in the American Supreme Court in 1870 by a lawyer named George Graham Vest as he spoke eloquently about a man and his dog, Old Drum.

What Does K9 Stand For?

One of the obvious answers to what K9 stands for is that it is a homophone for canine.  There is also a more detailed and specific answer.

The term is first used in March 1942 in an experimental program during WWII called K-9 Corps (canines in war).  By August of the same year, there are dog training centers across the United States. The K-9 Corps originally accepted 32 breeds of dogs. By 1944, the list is reduced to seven: German Shepherds being the most recognized today. The phrase has since also become popular for police and civilians alike.

Why Is a Cat Said to Have 9 Lives

One of the first mentions of the myth of a cat having nine lives is in the Shakespeare play, Romeo and Juliet.  There is also an English proverb that talks about a cat’s nine lives.  In it, it tells that for three he plays, for three he strays, and for the last three he stays.  Where this phrase originated from and why the number nine, is hard to determine.

In ancient times, people were not aware that a cat, unlike any other animal, could adjust the position of its body during a jump or fall from high places and land on its feet.  Therefore, they believed that a cat must have multiple lives to be able to escape these risky scenarios unhurt.  Did you know that the number of lives is changed in different places of the world?  In some Spanish speaking regions the cat is said to have seven lives.  In Arabic and Turkish myths, the cat is said to have six.

As another example, Atum-Ra, an ancient Egyptian sun god was believed to turn into a cat and visit the underworld.  Legend says she birthed eight other gods, representing nine lives in one.

For more fun facts about animals or general questions you can contact:

Christi Knight, CPDT with Posh Paws Pet Care, LLC
843.900.0438
Visit our website at PoshPawsPetCareSC.com
Or send us a note from our contact page here.