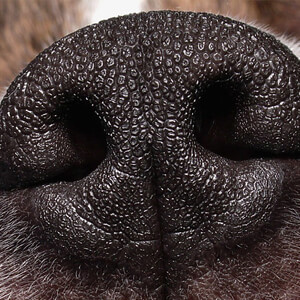 A Dog’s Sense of Smell

It’s a power worthy of a Super Hero

With the release of several super hero movies recently, it’s easy to think about having a super power yourself.  We think that a dog’s sense of smell would make for a great new super hero power — Captain Marvelous Scent Detection.  A dog’s sense of smell seems to be an underrated and often overlooked super talent within our four-legged friends.

If you think it’s amazing that you can smell something cooking in the kitchen from the upstairs bedroom, you’ve got nothing on your dog.

Dogs have over 250 million olfactory receptors.  This number varies slightly depending on the source.  In comparison, humans have a meager 5-6 million receptors.  Therefore, dog’s have the ability to smell up to 100,000 times better than people (depending on the breed).  Dogs can detect scents, odors, and home-made cooking in parts per trillion.  This means that, according to the Marbach Road Animal Hospital in San Antonio, Texas, dogs can smell things buried as far underground as 40 feet.  Other statistics have shown the ability for a dog’s sense of smell to lead them to find people who have drowned in over 80 feet of water.

You may have even heard that some dogs have been able to alert to humans who have cancer cells.  If that’s not a super power, we’re not sure what is (because even a doctor cannot do that without special equipment).

Breathing and Smelling Are Different

For a human, the act of breathing and also smelling are performed in tandem.  For a dog, however, these processes are performed separately.  Thanks to physiology, a dog can focus on smelling separately from his breathing.

Like a motor found in a sports car, a dog’s nose is specially built for optimum performance.  The dog’s nose is able to separate air for breathing and air for smelling.  This is accomplished by a fold of tissue inside their noses.  The air for smelling is directed to nasal turbinates.  The nasal cavity is occupied by this network of bones that support olfactory mucus membranes.  This area increases the respiratory surface area, creating turbulence of the air passing through.  When the pooch exhales, air pushes out of the slits on the sides of their noses with an airflow that brings more smells in.  Marvelous.

Dog’s Have an Extra Organ for Smelling

A dog’s sense of smell is enhanced by an organ that human’s don’t have.  Dogs have what’s called the Jacobson’s organ. It is located at the bottom of the nasal passage and allows dogs to identify pheromones.  This is helpful for them in identifying their own pack and the scent of other dogs.  From birth, it helps them to identify nipples for nursing. Pheromones emit chemical cues and all animals secrete them.  Each signals a special message that a dog can understand.  Dogs can smell human pheromones, too.  You may notice they’ll come to investigate or react to you in certain situations where your body is secreting pheromones.   For instance, while they cannot smell fear itself, they can smell the pheromones secreted while you are fearful.

Dogs have a super brain, too.  According to NOVA, the part of a dog’s brain dedicated to smell is 40 times larger than a human’s. In humans, our sense of smell is found only in a small region on the roof of our nasal cavity.  For us, there are more smells in the environment than there are receptors connecting to the brain.

With all of that in mind, we think a dog’s sense of smell would be a pretty marvelous super power!

For more information about this subject or general questions you can contact:

Christi Phillips, CPDT with Posh Paws Pet Care, LLC
843.900.0438
Visit our website at PoshPawsPetCareSC.com
Or send us a note from our contact page here.

← Cats vs DogsPets: Some Origin Stories →