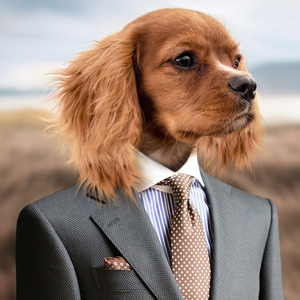 We all know the phrase that Dogs are a man’s best friend.  There may be more to that than we initially thought.  For instance, in 2015, a study showed that dogs were likely to give the cold shoulder to other humans who treated their owners poorly.  So, are dogs more like humans than we give them credit for?  Read more and decide for yourself.

The study showed that when these people then offered the dogs a treat that the dog favored the helper group.  Even further, the dogs favored the neutral person over the non-helper person.

Is your dog a good judge of character?  Read the article above for all of the details included in the study.

Is Your Pup Empathetic?

Here, you can watch an experiment conducted in the UK challenging if dogs are more like humans than given credit for when it comes to empathy.  Several dog breeds are tested to see if they are empathetic to a stranger in distress.

The Untrained Dog Will Watch Where We Gaze

Humans often prefer a dog that has been properly trained.  In the case of curiosity, however, only the untrained dog will wonder what we are looking at.  A trained dog is quickly taught to watch their owners facial expressions, hand signals, and voice commands.  However, an untrained dog will be curious as to what you are gazing at, even if it is off into blank space.  Even more surprising, an untrained dog will look back and forth between you and what you’re gazing at trying to understand your interest.

While there is still much research to be done, it would appear that dogs are more like humans than we’ve given them credit for.

Or send us a note from our contact page here.

← Hazards of Christmas Decorations for PetsImprove Your Dogs Health →